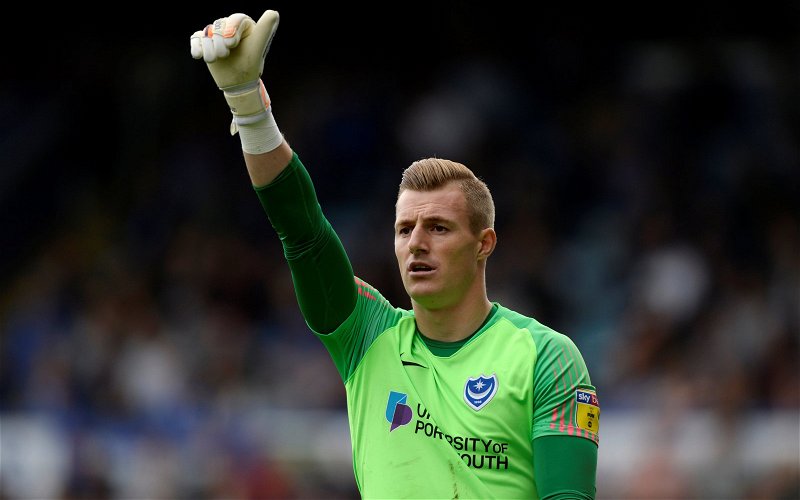 Pompey kept their promotion charge on track but had to thank keeper Craig MacGillivray for several stunning saves to keep the Chairboys at bay.

Kenny Jackett named the expected side with Oli Hawkins and Gareth Evans replacing Omar Bogle and Ronan Curtis, who both dropped to the bench.

After last week’s Wembley exploits Pompey started on the front foot and created problems for their hosts from the word go. It was surprising that it took eighteen minutes to get in front. Evans floated in a free kick which was partially cleared but played in again by Matt Clarke and Jamal Lowe shot through a crowded area and into the bottom corner.

Pompey seemed to be coasting but just before the break, MacGillivray had to be at his best to turn aside free kick from McCarthy and then from the resulting corner he did even better to keep out a strike from ex-Blue Paris Cowan-Hall.

Pompey started the second half with a bang. Evans played a through ball down the centre and Brett Pitman stole the ball from defender Stewart and slotted past Ryan Allsop. That was after just twenty-seven seconds!

Wycombe though refused to lie down and hit back when another ex-loanee Marcus Bean slotted home when clearly in an offside position but the officials felt the last touch was from a Pompey player, although replays suggest that was a wrong decision.

Pompey though hit back five minutes later when Pitman slammed home a free kick from the edge of the box after Evans had been brought down.

Both teams looked for more goals and MacGillivray again denied Samuels but with eight minutes left he was helpless as he was unsighted when Kashket hit a volley from the edge of the area.

Wycombe continued to pump high balls at substitute Akinfenwa but Pompey held out for their nineteenth win away from Fratton Park this season!

With Luton and Barnsley dropping points the top of the table looks very interesting. Sunderland needed a last minute winner at Rochdale and would now be the favourites to grab the second promotion spot alongside Luton.